In the last Act of Macbeth, the trickery of the Witches reveals itself, and, while at siege in the castle of Dunsinane, King Macbeth hears of the death of his wife.

Tomorrow, and tomorrow, and tomorrow,
Creeps in this petty pace from day to day,
To the last syllable of recorded time;
And all our yesterdays have lighted fools
The way to dusty death. Out, out, brief candle!
Life’s but a walking shadow, a poor player,
That struts and frets his hour upon the stage,
And then is heard no more. It is a tale
Told by an idiot, full of sound and fury,
Signifying nothing. 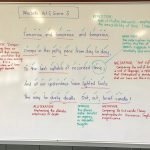 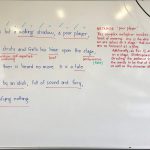 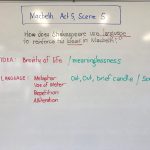 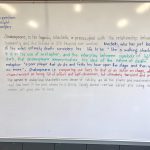 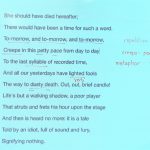 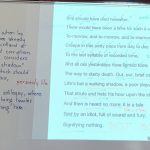 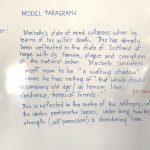 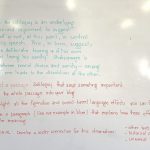 Macbeth on hearing that his wife, Lady Macbeth has killed herself, falls into a deep despair. When he has Macbeth say his “life is but a walking shadow“, Shakespeare is invoking the metaphors of light and darkness. This tells us that Macbeth’s life has become pointless to him. Even though he is the king of Scotland, he has lost everyone who was close to him, along with any control over his country or respect from his people. Without those things that give his life meaning, it now lacks meaning or substance, just like a shadow. In addition to this, Shakespeare describes Macbeth as if he were an actor on a stage (which is ironic, since he is). He says life is like a tale, “told by an idiot / Full of sound and fury / Signifying nothing.” This shows us that at this moment in the play, Macbeth feels as if his life has come to nothing.

On learning of his wife’s suicide, Macbeth reaches a state of despair where he feels his life is now meaningless and that he has nothing to live for. When Shakespeare has Macbeth describe his life as “but a walking shadow”, he reinforces how insubstantial Macbeth’s life has become by using the metaphor of a shadow. By comparing Macbeth’s life to a shadow, he is showing that he is nothing but the dark consequences of his actions. Throughout the play, Shakespeare makes frequent references to light and darkness to symbolise good and evil. Macbeth compares human life to a candle “Out, out, brief candle!” which reinforces the brevity (or transience) of our mortal existence. This reinforces the reality that we are all born to die, and in Macbeth’s case he has realised that he may be too late to reconcile with his evil actions.